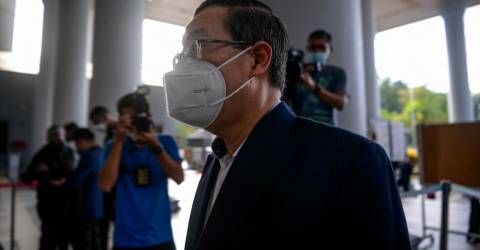 KUALA LUMPUR: The director of Zenith Construction Sdn Bhd (ZCSB) told the Sessions Court today that he had given RM3.3 million to Lim Guan Eng(pictures) to help his company secure the three twin roads and the undersea tunnel project in Penang.

Datuk Zarul Ahmad Mohd Zulkifli, 62, said any money given to Lim, who was then chief minister of Penang, was subject to two conditions, that he be awarded the project and would be paid as soon as payment would be approved.

“It was all part of the request for 10% of the project’s profits. If the project was not awarded to me, of course, I would not pay,” he said when reading his testimony during questioning by Deputy Prosecutor Farah Yasmin Salleh during the corruption trial of Lim today.

Upon delivering RM2 million out of RM3.3 million to Lim, Zarul Ahmad said he gave the money to Lim through a businessman named Gnanaraja, who acted as an intermediary as it was feared that he (Zarul Ahmad) was being watched by the Malaysian Anti-Corruption Agency (MACC).

“On August 17, 2017, I informed Azli Adam to withdraw RM2 million which would be given to YB Lim. After my project negotiations were completed in Penang, I contacted Gnanaraja and told him that I wanted to meet him the day after.

“I told him I wanted to give him ‘chocolates’ to give to the ‘big boss’ via a Whatsapp message. Chocolate refers to money,” he said.

Prosecution witness 23 testified that around 5 p.m. he met Gnanaraja at a hotel in Petaling Jaya to pass two sports bags filled with RM1 million each.

“Gnanaraja arrived and parked in front of my car in the hotel lobby. He was in a Bentley. I then came downstairs and placed the two bags on the bonnet of his car,” he said.

Gnanaraja handed one of these bags to Lim as they visited a mall here on August 20, 2017.

“I could see that YB Lim was happy when I introduced Gnanaraja to him and on the way to Publika, YB Lim said he would go to Gnanaraja to have a chat with him.

“When we arrived at Publika, YB Lim thanked me and patted me on the shoulder. I was sure it was because he took the bag with RM1million in it and was showing me his appreciation,” he said.

The witness said he informed Gnanaraja to pass the remaining RM 1 million which was in his custody (Zarul Ahmad) to Lim, who was in Kuala Lumpur to attend a party meeting on August 28, 2017.

Zarul Ahmad said that Lim asked for RM2 million as he expected an election to be held soon at that time and if he did not provide the money he feared that Lim would disrupt his project in the future.

He added that he also gave Lim RM1 million in January, April and May 2016, including the Chinese New Year, and that the money was the 10% reduction in the project’s profits.

Zarul Ahmad added that he was cooperating with MACC not because of politics, but after sharing with him several facts showing that he was simply being used as a tool by Lim.

“If I had not been called by MACC to provide a statement, it would not have come to light and I would not have revealed anything about YB Lim and my misconduct. MACC had continued their investigation, which s was a continuation of what he had investigated at the beginning of 2018.

“MACC’s investigation this time revealed findings which led to my full disclosure. A large withdrawal was found and they asked me about it. To avoid action being taken against Azli Adam and I , I decided to talk more about other payments made to YB Lim,” he said.

Lim, 61, faces amended charges of using his position as chief minister of Penang to solicit RM3.3million in bribes and also a 10% cut in company profits from Zarul Ahmad on the underwater tunnel project. He is also accused of selling off two pieces of land owned by the state government to two companies linked to the tunnel project.

The track before judge Azura Alwi continues next Monday.– Bernama