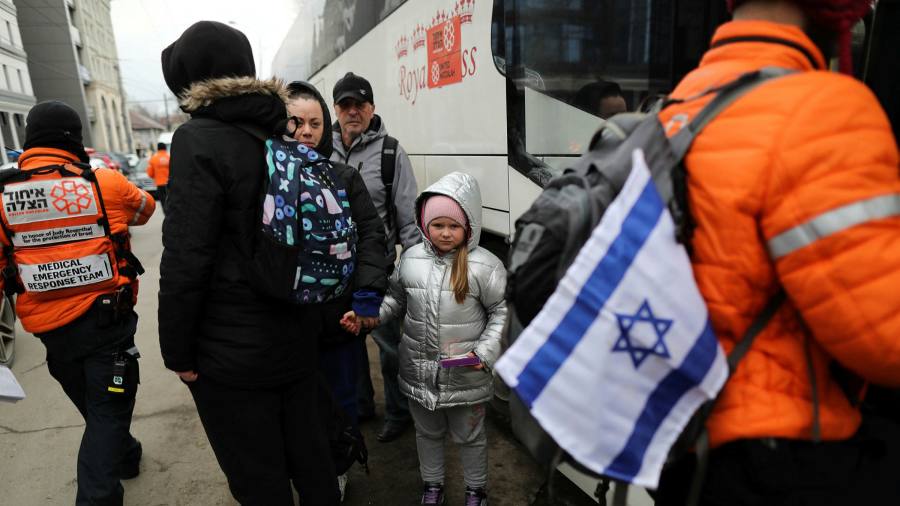 Just over a week after the Russian military began shelling her hometown of kyiv, Ukrainian nurse Sofiia Kruglaya found herself in a hotel by the sea in the Middle Eastern city of Tel- Aviv, grateful to have received an offer of Israeli citizenship.

The road to safety began with a five-day journey across the border between Ukraine and Poland. In Warsaw, without proper documentation, she sought an Israeli diplomat outside the embassy and told him she was Jewish. The diplomat put her in touch with an agency that relocates Jews and two days later she arrived in the country on a charter plane.

Under Israel’s Law of Return, anyone in the world with at least one Jewish grandparent is eligible for Israeli citizenship, and Kruglaya is one of some 17,000 Ukrainian refugees – nearly a third of whom are Jewish – who have arrived in Israel since the beginning of the war from Russia. assault on their country.

With its 200,000 strong Jewish community, there are deep cultural ties between Ukraine and Israel, and Israeli officials estimate that up to 50,000 Ukrainian, Russian and Belarusian refugees could arrive in the next three months, with potentially double that number by the end of this year. It would be the biggest wave of immigrants entering Israel since the 1990s, when more than a million Jews settled in the country after the collapse of the Soviet Union.

Naftali Bennett, Israeli Prime Minister, hailed the initiative the government has dubbed Operation Returning Home. “This is . . . a moment for which we were destined and for which the State of Israel was created,” he told his cabinet this month. Ukrainian President Volodymyr Zelensky has been less optimistic, saying in a speech to Israeli lawmakers that Israel seemed “indifferent” to the plight of its people and that it needed to do more,

Analysts credit the wave of the 1990s with changing the social, political, and economic composition of Israel, revitalizing its economy, and spurring a political shift to the right. “The number of people was enormous – like demographically fitting all of France inside the United States. These immigrants were extremely well educated, mainly in the fields of engineering, medicine and technology, which boosted the Israeli economy. And politically, it pushed the country to the right. You will hardly find immigrants from the former Soviet Union voting for left-wing parties,” said Alex Selsky, former adviser to Prime Minister Benjamin Netanyahu.

With little support for Russian President Vladimir Putin within the existing Russian-Israeli community, there should be no tensions between the communities. This wave, although much smaller, also brings challenges and some initial controversy over restrictions on non-Jewish Ukrainians. Interior Minister Ayelet Shaked scrapped a more restrictive entry policy earlier this month after a video showing non-Jewish Ukrainians being held for hours at an Israeli airport, with children sleeping on baggage carousels, caused a public outcry.

“We saw these images in black and white, in the concentration camps; this is how we looked like at Auschwitz. Should these people be restricted via quotas? It’s not moral and it’s not Jewish,” said Diaspora Affairs Minister Nachman Shai during a visit to the Ukrainian border.

The new, more expansive plan offers unlimited entry into Israel to any Ukrainian with relatives already in the country, who are required to house them. The pre-war Ukrainian community, most of whom were economic migrants, is estimated at 20,000 people. A quota of 5,000 is still in place for people without families in Israel. The quota and other bureaucratic hurdles are being challenged in court by civil society groups, who want all restrictions lifted. Shaked defended his policy. “We are first and foremost the national home of the Jewish people and will focus most of our efforts on those who are eligible for the Law of Return,” she said earlier this month. “We are opening our doors, but not unlimitedly.”

It remains unclear how non-Jewish refugees, currently ineligible for government assistance or official status, will support themselves financially solely on temporary tourist visas.

“As long as these people don’t have a work permit, the government forces them to work illegally and then it’s easier to deport them,” said Shai Cohen, director of the Israeli Alliance, a civil society group. that helps refugees. “The aim is to limit and deter the number of people arriving here. The prism of the government is that of illegal immigration, not that of the asylum request.

Kruglaya, who arrived on March 6, was on one of the first flights to land in Israel. She and her fellow immigrants were welcomed at Ben Gurion Airport with a red carpet, music and a mass of media. From there, the 23-year-old was taken to a government-subsidized hotel, a hub for well-wishers.

Are you personally affected by the war in Ukraine? We want to hear from you

Are you from Ukraine? Do you have friends and family in or from Ukraine whose lives have been turned upside down? Or maybe you do something to help these people, such as fundraising or hosting people in your home. We want to hear from you. Tell us via a short survey.

The hotel lobby on a recent weekday was filled with volunteers. Members of a youth group escorted children to a park as local government workers instructed them on how to register with the national health system, sign up for Hebrew lessons and open an account banking. The business center was filled with donated toys, clothes and toiletries.

“I didn’t really expect such a warm welcome, so many people want to help,” said Larisa, 53, a university professor and mother of three who has also stayed at the hotel. She fled to Poland after the bombing began with the women of her extended family, but refused to give her last name since her husband and son are still in kyiv, helping with the war effort, after Ukraine has banned men between the ages of 18 and 60 from leaving the countryside.

Kruglaya and Larisa were eligible to stay at the Tel Aviv hotel for two weeks. The government, already facing a nationwide housing shortage, plans to provide housing assistance and temporary accommodation.

For Kruglaya, these problems seem manageable. Pulling out a video on her phone of her now rubble-laden kyiv neighborhood, she wondered aloud if her flat was still standing. “My friends and family are still here and I hope to see them alive one day,” she said. “But I’m trying to get ahead here [in Israel]. I may have a family in the future, a life. I will probably return to Ukraine as a visitor.