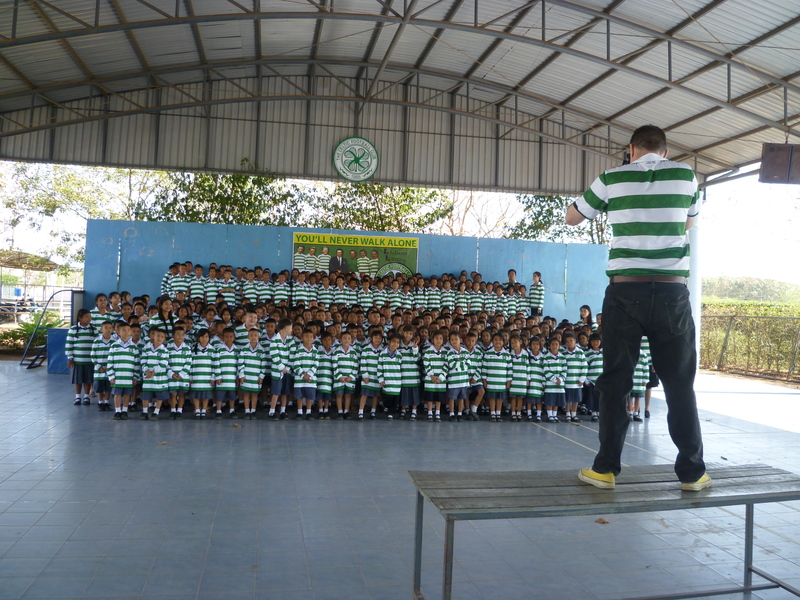 The story of Thai Tims, as a student works in one of the world’s most renowned hotels

The history of Thai Tims is incredible. It covers football and the teaching of English, and spans from Thailand to Scotland.

The story originates from a young Thai boy named Berni Lennon. He loves to play football with his brother Steven and like his Scottish father he supports Celtic. When Berni was old enough to go to school, his parents applied locally, but it soon became apparent that Berni syndrome was a barrier to the application process. Schools in the area simply did not have enough resources or training to meet his additional needs. Over time, the situation became desperate as the prospect of traveling 80 kilometers to a facility that could accommodate him became a real possibility.

Berni was born with Down syndrome at Chanthaburi public hospital. The history of Thai Tims begins https://t.co/zg3v6FJoLd pic.twitter.com/A3HF7hBq95

Parallel to Berni’s life, yet essential to the story, are Mr. Praman and Ms. Yuvaret Sarakoses. Both have Buddhist beliefs and have considerable influence in their native region of Thailand. These two factors combined to spark a desire for charity and the couple got involved in a project at Triamsuksanayaiam School in Chanthaburi province. They had heard of Berni’s plight and asked for help at the school. The institute accepted the youngster and he was finally integrated into the education system.

Mr. Praman and Ms. Yuvaret Sarakoses had previously tried unsuccessfully to bring Berni into many other institutions. So, to thank the school for their receptiveness, the Lennons decided to volunteer to teach English to the students at the school. Despite their best intentions, the couple had limited experience and resources. Therefore, they improvised and discovered that passion is often the source of many accomplishments. With this in mind, the two decided to teach the children the lyrics to Celtic songs. The idea turned out to be excellent from the point of view of tuition fees. Indeed, Celtic has such a literate songbook and it was an effective way to educate the upper classes quickly. Classrooms swayed to the sound of The Fields of Athenry and The Celtic Song, which led these wonderful children to become the â€œThai Timsâ€.

The school built on this linguistic breakthrough, thanks to YouTube, and teachers then began to write their own songs, adapting existing tones and educating children to such a level that they felt proficient in performing. anything from This Land Is Your Land to Willie. Maley! Unsurprisingly, once the videos of these performances were spotted, they shone in the public consciousness. Donations to the Good Child Foundation were flooded like valleys during the monsoon. (The Good Child Foundation is the charity that Mr. Praman and Ms. Yuvaret Sarakoses created and managed their projects.)

Thanks to donations, more children with Down’s syndrome were encouraged to join school. Things then took a terrific turn when footage of Thai Tims was shown on the big screen at Celtic Park. In no time, the Celtic FC Foundation approved the Good Child Foundation as one of its official charitable partners!

At that time in Scotland, a then 18-year-old Bhoy named Reamonn Gormley had just left school. In keeping with the frenetic pace of the rise of the Thai Tims, he had a few months before going to college, which he put to good use by volunteering to help Asian children. He quickly flew to Thailand and became a hero with the students.

A typical day started with Reamonn leading the vocals and helping introduce a bit more technical English instruction, while in the afternoon he could be found on the baseball field or offering his knowledge, acquired as a as a young Celtic player, to aspiring footballers at school. During this time, he spent evenings with the Lennons, who hosted him, and also enjoyed collecting fish from the local river with other families in the area.

After three months of fun, laughter and kindness; Reamonn said his goodbyes. He spoke a few words of Thai and vowed to come back to see his new friends the following year. It is absolutely disgusting that his promise failed to come true because in February 2011 Reamonn was tragically murdered. He was a handsome man with a heart of gold.

The news of the death of such a handsome young man has sparked immense anger and a palpable desire to eradicate knife crime in Scotland. The Celtic family learned about their volunteer work in Thailand and supported the Good Child Foundation with renewed generosity. Support has also moved to promote a Knife Crime charity, which aims to quell the sickening culture of carrying knives in parts of the country.

As Reamonn Gormley would have liked, the shadow cast by his death inspired Celtic fans to do even more good on his behalf. The Good Child Foundation released a charity single, Just Can’t Get Enough. The song raised thousands of pounds and sought to promote the association’s book: Berni Bhoy & The Thai Tims. It was a warm and upbeat interpretation and included a touching adaptation of the lyrics: “Reamonn, Jinky and Tommy Burns will smile from heaven to us all …”

Just when you thought the Thai Tims couldn’t perform anymore, they broke boundaries again. A huge effort from Berni Lennon’s parents paid off, when 42 children had the opportunity to go to Celtic Park in 2012. The children were hosted by the club and many activities were organized for them in Glasgow.

The joy was at the rendezvous when the delegation sang in front of the Celtic players at Lennoxtown. From there they sang with Bertie Auld, met Reamonn Gormley’s parents and played in the Celtic Supporter’s Association Rally. Their happiness was reciprocated by the thousands as the children then performed songs on the pitch before a home game against St Johnstone.

The trip also included a visit to the Archbishop of Glasgow and Lord Provost. Then a trip to Celtic’s spiritual home across the sea followed. In Belfast, they received a tremendous welcome and, as usual, smiled as they toured the Titanic Museum. Additionally, the band starred in a concert at Belfast Town Hall, where Tell Me Ma ‘and other Irish songs were performed for the benefit of the mayor, Niall O’Donnghaile.

The excursion ended by allowing the Thai Tims to perform Scottish / Irish medleys and Celtic songs, in front of a crowded audience at the Concert Hall in Glasgow. The enthusiastic dance and the passion of the performers could have brought tears to my eyes.

In 2013, the Good Child Foundation erected a green and white room – the Reamonn Gormley Hall in memory of their hero. And since then, they have continued to grow stronger.

The charity continues to thrive and today informed its followers on Twitter that one of its alumni, “L”, has now secured an internship at the Mandarin Oriental Hotel, recognized as one of the top establishments. in the world. The arrangement was organized by the venue’s chef, Leslie Stronach, who is a member of the Bangkok Celtic Supporters Club.

“L”, one of the children who sang at Celtic Park in 2012, who studied culinary arts at university, received an internship at the Mandarin Oriental Hotel, recognized as one of the best hotels in the world. . All thanks to chef Leslie Stronach of Bangkok CSC. pic.twitter.com/w1LXrT5Ts1

How wonderful to see this magical Celtic inspired charity continue to flourish. We wish “L” all the best in her new role and hope the Thai Tims enjoy the Celtic songbook for many years to come.

Virgin Hotels turns to Virdee to roll out self-check-in