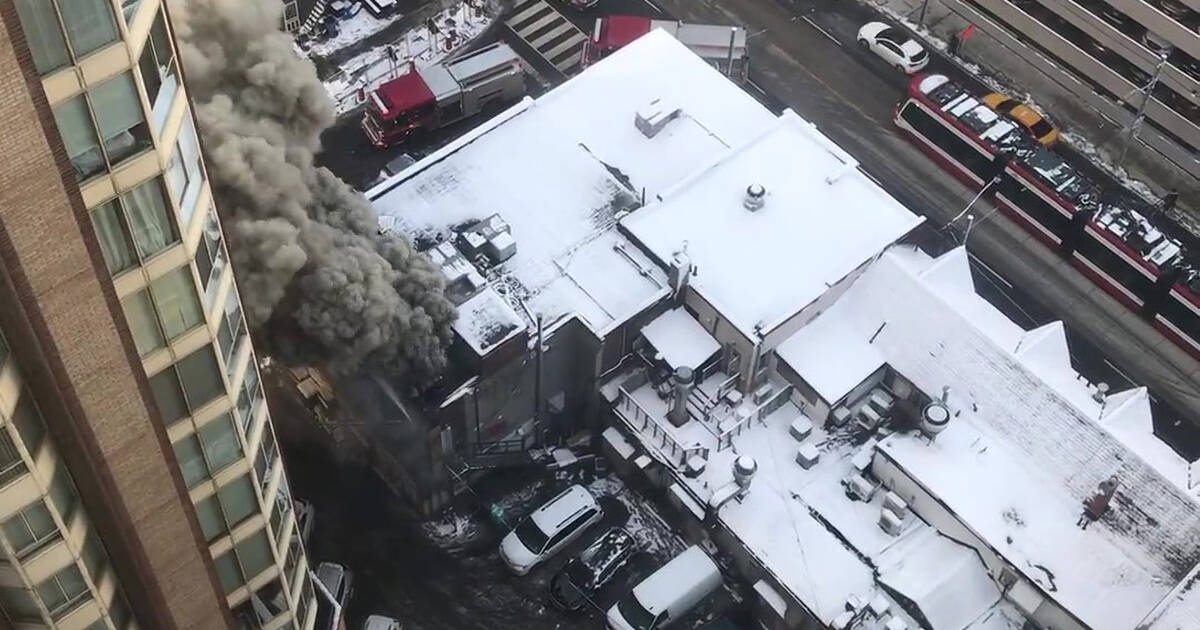 A heartbreaking scene unfolded shortly after 10:30 a.m. Monday morning when a double-alarm fire broke out in the back kitchen of Chinese restaurant Hong Shing.

Traffic was halted as plumes of smoke billowed from the property at the southeast corner of Dundas and Center, which has gained notoriety over the years for late-night brawls and racial discrimination from patrons.

Teams responded to reports of a fire at the scene, with an urgent call to firefighters as someone was reportedly trapped in the restaurant’s basement. A follow-up report indicates that the woman has been rescued and is being assessed for possible smoke inhalation.

Photographer Julinda Morrow was perched 23 levels above the scene of the fire in the DoubleTree by Hilton hotel to the southeast, witnessing the incident by chance.

â€œI was kindly moved to a room on the top floor. I was settled in and just checking out the new view,â€ Morrow told blogTO. “Seeing the smoke coming out, I grabbed my phone (the only device available) and started filming. Luckily the fire department quickly got the situation under control within an hour.”

Never a dull moment in the big city. Still at the hotel, view from the 23rd floor. ?? #Toronto pic.twitter.com/aUrgcKD5Ku

A spokesperson for Toronto Fire told blogTO that the fire started on the ground floor in the restaurant’s kitchen. Despite reports that the woman was trapped, she was examined at the scene by EMS teams and luckily walked away from the scene without any injuries.

The news is a big setback for Hong Shing, who just launched a pop-up menu in Rebel nightclub.