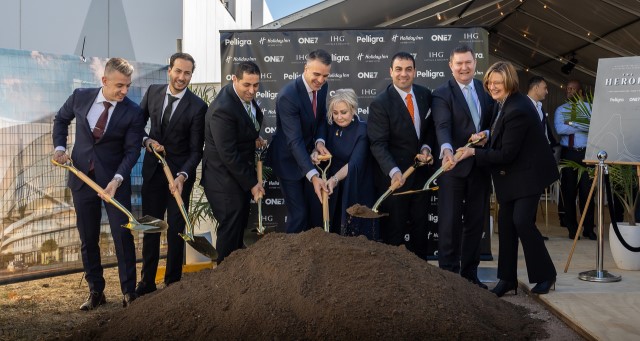 IHG Hotels and Resorts has announced its fifth hotel in Adelaide and sixth hotel with the Pelligra Group with the signing of Holiday Inn and Suites Mawson Lakes.

Holiday Inn and Suites Mawson Lakes, owned by a joint venture between the Pelligra Group and Bruno Muscatello, is due to open in 2024. Located in the northern suburbs of Adelaide, just 20 minutes from the CBD, the 150-room hotel Holiday Inn brand features including an open lobby, as well as an all-day dining restaurant and lobby bar, conference rooms, and a gymnasium.

With six hotels now open or signed, the Pelligra Group is one of IHG’s largest partners in Australasia, and there are ambitions to grow the partnership significantly. Already the group, with its joint venture partners, welcomed the brand new Holiday Inn Werribee in 2021, featuring Australia’s first open lobby, and took the lease of the Holiday Inn Melbourne Airport in 2019, with plans to Complete renovation of the property to bring it up to world class Holiday Inn standard. By the end of 2023, it will also open Holiday Inn Melbourne Richmond, Crowne Plaza Melbourne Carlton and Holiday Inn Dandenong.

Speaking at the launch, Ross Pelligra explained his passion for the potential of North Adelaide.

“When we first invested in South Australia at the Holden plant we were excited about North Adelaide with the growth, the people and the growth of the industry and we also noticed a lack quality infrastructure,” said Pelligra.

“We looked around to see where we could have an iconic building for the next generation, as we take a long-term view with everything we do. As I started to do my research I could see there was an opportunity here and my next call was to Leanne and it started to show there was a great need for the hotel with research showing that ‘there was no demand for one but actually two hotels as no new hotels have been built there in the past 10 years. We see this as a long-term, multi-generational project that will unlock North Adelaide. For us, as a company, we see this as an off-the-shelf project that is needed today as the city grows – it takes a hero in the region to lead the city. »

Macpherson was proud to celebrate the signing of Holiday Inn and Suites Mawson Lakes.

“I want to congratulate Ross and the Pelligra team for investing in tourism and hospitality in South Australia. Today’s announcement is more than words – today we are innovating and saying with confidence that this great hotel is well and truly on track to open in less than two years,” said Macpherson.

“We can see an incredible future for tourism in South Australia with drivers such as the University of South Australia, hospitals and industry close by, we are confident that this brand new Holiday Inn will be a very sought after for business and leisure travellers.

“Excitingly, this will be IHG’s fifth hotel in Adelaide, underscoring our position as one of the leading hotel operators in this great city. It complements our existing hotels – the iconic Intercontinental Hotel Adelaide and newly opened Crowne Plaza Adelaide, Hotel Indigo Adelaide Markets and Holiday Inn Express Adelaide City Centre.

IHG’s partnership with the Pelligra Group has grown over the past five years, now marking the opening and signing of six hotels in Australia.

“I know the Holiday Inn and Suites at Mawson Lakes will show the best of the brand, just as Pelligra has done with previous Holiday Inn properties, especially the new Holiday Inn Werribee which is a shining example of the brand and c ‘is the first in Australia with the signature Holiday Inn open lobby,’ said Macpherson.

“I am delighted that we can continue this growth with the signing of this great hotel as well as the upcoming openings of Holiday Inn Richmond, Crown Plaza Melbourne Carlton and Holiday Inn Dandenong and I think it is fair to say to Ross that we have ambitious plans to grow this portfolio together. Team Ross and Pelligra, thank you for your great partnership with IHG and for your shared commitment to opening amazing hotels together. We can’t wait to see this stunning property come to life.

Leanne Harwood, IHG Hotels & Resorts Senior Managing Director for Japan, Australasia and the Pacific, said: “To be here today, announcing a new state-of-the-art hotel with one of our great partners, Ross Pelligra, is incredible and a true testament to the trust and strength of our relationship. We have a vision to create cutting-edge, world-class hotels and the Pelligra Group clearly has an affinity for our brands, and we would like to grow that together. It’s an honor to be here today alongside Ross and his team and to build on these foundations that we have built together.

The hotel will be located next to the University of South Australia’s Mawson Lakes campus, Mawson Central shopping center and Parafield Airport and close to RAAF Base Edinburgh, Lyell McEwin Hospital , several major manufacturing and logistics centers, making it an ideal base. for those in town for business or leisure.

IHG has had one of its biggest years of hotel signings and openings in recent years and with nearly 150 hotels open or signed in Australasia alone it is considered one of the leading operators hoteliers in the region.

Reporting by Her Majesty’s James Wells