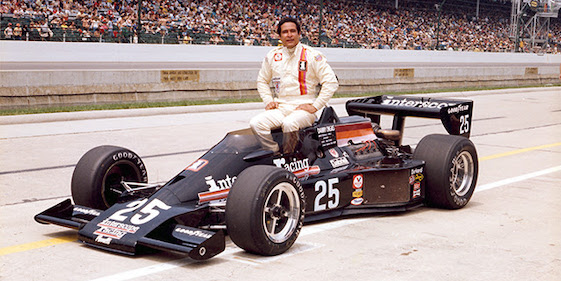 Ongais made 11 Indianapolis 500 starts between 1977 and 1996, recording four top 10 finishes. His most productive years at the 2.5-mile Indianapolis Motor Speedway came with Interscope Racing and its eye-catching black No. 25 Parnelli and Penske chassis. powered by Cosworth engines, with a best finish of fourth in 1979 and a best start of second next to poleman Tom Sneva in 1978.

Ongais is the only Hawaiian to start in the 105-year history of “The Greatest Spectacle in Racing.” Fans included his heritage in his nickname “The Flyin’ Hawaiian”, and the nicknames “On-Gas” and “On the Gas” were puns on his last name.

Born May 21, 1942, in Kahului, Hawaii, Ongais began one of the most versatile careers of any rider of his era as a teenager, winning a Hawaii state title in motorcycle racing in 1960.

Ongais also started drag racing in the early 60’s and became one of America’s top straight line competitors in the early 1970’s. He finished second to Mike Snively in the Top Fuel class at the US National Championships in the 1966 NHRA after beating legendary Don “The Snake” Prudhomme in the semifinals at Indianapolis Raceway Park.

Ongais then won the Funny Car title at the 1969 NHRA U.S. National Championships at IRP, drag racing’s most prestigious event, in a distinctive blue Ford Mach 1 Mustang fielded by Mickey Thompson. The win came a year after Thompson attempted to enter Ongais in the 1968 Indianapolis 500. But Ongais’ entry was rejected by the US Auto Club because he had almost no racing car experience. open wheel racing.

Thompson and Ongais also collaborated to set nearly 300 national and international speed records on the famous Bonneville Salt Flats in Utah in a Mustang Mach 1 in the 1960s.

Ongais’ successes in straight-line competition led to his induction into the Motorsports Hall of Fame of America in 2000 in the Drag Racing category.

Service in the United States Army in the early 1960s exposed Ongais to sports car racing in Europe, and he moved from drag strips to ovals and road courses in the mid-1970s. Ongais dominated competition Sports Car Club of America in 1974, catching the attention of young media mogul Ted Field, who had recently founded the Interscope Records label.

Ongais and Field teamed up with great success in Formula 5000 and INDYCAR in the late 1970s. Ongais also competed in four Formula 1 races in 1977 and 1978, including two starts with Interscope, scoring a best finish of seventh in 1977 at the Canadian Grand Prix.

Ongais appreciated his best season with the Interscope team came in 1978, when he won five races and eight poles en route to eighth place in the USAC points standings. That season, Ongais started in the middle of the first front row of all 200 mph at Indianapolis, between pole-sitter Sneva and rookie Rick Mears.

Ongais and Field’s successes with the Interscope team extended to sports car racing, with Field also driving. They teamed up with the legendary Hurley Haywood to win the Rolex 24 at Daytona in 1979 in the Interscope Porsche 935 prototype.

While Ongais was known for his blistering speed in Indianapolis and elsewhere, he also garnered attention for surviving some of the most violent crashes of his day. Ongais suffered serious injuries in a head-on crash during the 1981 Indianapolis 500, missing the rest of the season to recover.

In 1985, he also survived a spectacular rollover at the 2-mile Michigan International Speedway after contact with the rear end of Phil Krueger’s slower car along the rear stretch.

Driving for Team Penske in 1987, Ongais crashed his PC-16 chassis in practice and suffered a concussion which forced him to retire from racing. At the insistence of teammates Rick Mears and Danny Sullivan, team owner Roger Penske chose three-time Indy 500 winner Al Unser to replace Ongais.

“Big Al” then took his fourth Indy 500 victory in a year-old March 86C chassis that served as a show car earlier in May in a hotel lobby in Scranton, Pennsylvania. At 47, Unser became the oldest driver to win an Indy 500 while joining AJ Foyt Jr. as the second driver with four Indy 500 wins.

The tragic circumstances of another crash led to Ongais’ final start at Indianapolis in 1996. Pole sitter Scott Brayton suffered fatal injuries in a post-qualifying crash during practice, and team owner John Menard hired Ongais as a replacement pilot. Ongais _ racing at 54 in his first 500 since 1986 _ finished a solid seventh after starting from the back of the traditional field of 33 cars.

Ongais’ last attempt at Indianapolis came in 1998, when he failed to qualify in a Team Pelfrey car. Ongais’ career stats in the Indy 500 credit him with leading four races for 79 laps overall. He also recorded the fastest lap of the race, 192.678 mph, as a rookie in 1977.