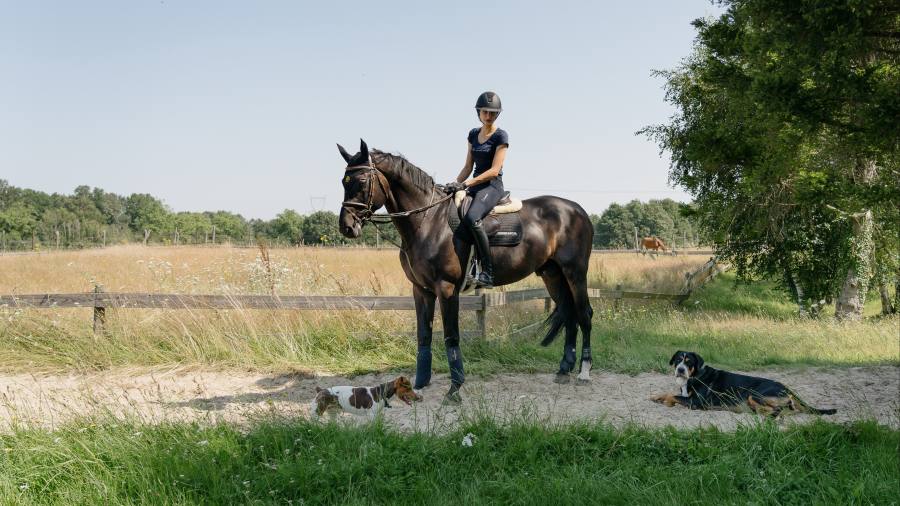 Letter from the editorial staff of HTSI: in the saddle!

The world of show jumping is not a subject I know much about: a severe allergy to horses put an end to my own equestrian ambitions a long, long time ago. But like any student of Black beauty, Where Velvet International, or even Jilly Cooper will understand, there is a strange spell that happens to some people when they find themselves in front of a horse. The world of horse riding – and especially of show jumping – is a world of endless fascination. Where else could one find tech scions, expedition heiresses, rock descendants and models competing in the same field? Despite the equestrian establishment’s extraordinary social background, there are also some mind-boggling details to consider: the cost of housing and maintaining its horses, the tailor-made riding and riding equipment, the astronomical prices for participation in competitions; and the shining, shining beauty of the competitors – both equine and rider.

But despite all the privileges and glamor of the international circuit, there is another story that celebrates the simple intimacy between a rider and his horse. Beyond the HermÃ¨s saddle or fancy breeches, even the most elite riders have taken years of early mornings and hours of grooming to gain that vital bond of trust that must be shared. As the year of show jumping culminates with one of its most illustrious competitions (the Longines FEI Jumping World Cup), Jamie Reid studies what it takes to make it to the show jumping field, while photographer Alex CrÃ©tey Systermans takes us to some of the most exclusive stables in the world.

Where else could one find tech scions, expedition heiresses, rock descendants and models competing in the same field?

In the meantime, being a fan of his work as a stylist for a long time, I am delighted that Tony Irvine is making his debut this week in the magazine. His shoot with photographer Justin Leveritt takes us to the New York coast to showcase some of the 90s influences in men’s tailoring right now – 90s fashion, like 90s music, movies, hairstyles (hello, curtains) and television have fully re-entered the cultural dialogue. This socket is less Sex and the city– outrageously fabulous style, however, and more in keeping with the simplicity and minimal monochrome silhouettes of Yohji Yamamoto, Helmut Lang et al. Another fashion debut, Erdem Moralioglu talks to us exclusively about his first collection for men. He’s a designer known for his historical, romantic, and richly narrative outlook, so I was curious to see how his clothes for men and women would intersect. Rather than seeing his men and women in adjacent collections, the designer sees his new line as a continuation of the Erdem universe, despite now being furnished with fluffy yellow mohair sweaters and Derek Jarman-inspired overalls.

And finally, as the rain hits autumn and the day shrinks by the minute, we turn our thoughts to Italy and a new hotel on the Amalfi Coast. It hardly seems possible that there is enough real estate to create real competition in this densely populated area, but the ambitious co-owners of Borgo Santandrea have planned to do so. Using the bones of an original structure built in the 1960s, the hotel features a mid-century design aesthetic, along with furniture from that same period, much of which was imported directly from the owner’s home. With its geometric angles in azure color, ceramic floor and Scandinavian lines, the Borgo Santandrea offers the polar opposite of kitsch Riviera style. Maria Shollenbarger checked in shortly after it smoothly opened and while it was still an ongoing atmosphere, I wouldn’t wait too long if you want to see it for yourself.

For the best of How to Spend It straight to your inbox, sign up for our newsletter at ft.com/newsletters

The ability to concentrate is vital