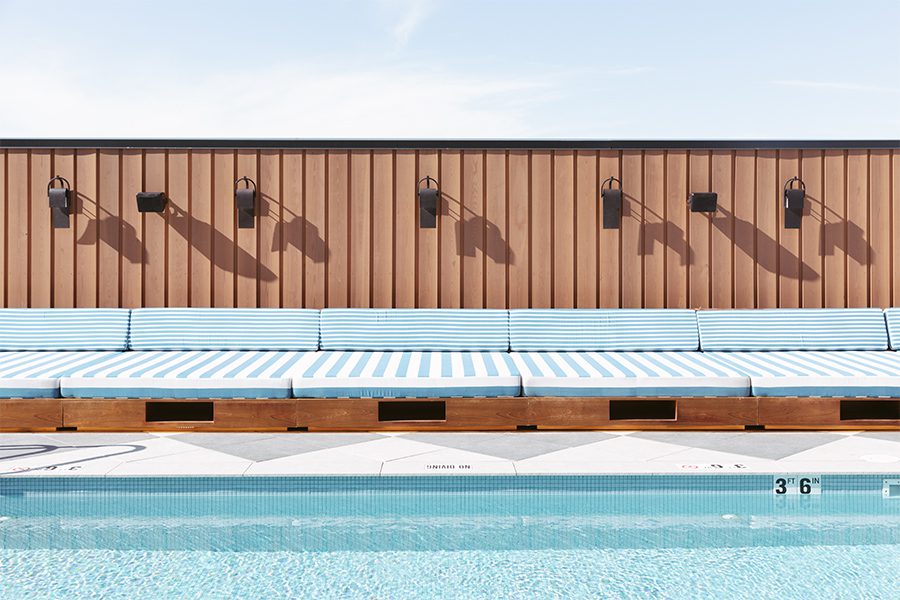 Inside the exclusive yet inclusive Clayton Members Club & Hotel

With its artistic and relaxed atmosphere, Clayton Members Club and Hotel in Denver aims to shake up the establishment in his neighborhood tony Cherry Creek. Designed by a Denver-based developer BMC Investments as an exclusive yet inclusive members club, the destination, operated by Aparium Hotel Group, is inspired by the Soho House model.

Clayton is a hybrid of camera-free spaces that include private meeting rooms, fitness space, rooftop pool, bars, and lounges; a hotel with 63 bright and airy rooms; and three public restaurants. Among these is the casual OAK Market for all-day take-out; Of A Kind, inspired by the Colorado River, with an interactive horseshoe bar and a chandelier that nods to modernists like Frank Lloyd Wright; and the tucked away speakeasy Five-Nines, where an undulating ceiling takes inspiration from the Colorado landscape.

Wooden details cover the bar in a members-only area, topped with an architectural light fixture

Supported by a desire to cultivate creativity and connection between people from different cultural backgrounds, the club’s mission is rooted in welcoming different professions, ages, LGBTQ+ identities, ethnic groups and personal interests. diverse through balance and parity in the membership base. Nearly half of the committee’s 40 voting members identify as Black, Indigenous and People of Color (BIPOC) and/or represent different gender expressions, ages and industries, and they are encouraged to invite their contemporaries to join Clayton. The annual fee of $3,000 is reduced for members under 30 and free for contributors to its art exhibitions and activity programs.

With previous collaborations on the Halcyon Hotel in Cherry Creek, as well as numerous other projects, including BMC’s own offices, the developer has challenged AvroKO create spaces that promote social engagement. “We created various lounges for intimate discussions and promoted art from local artists that continues to spin,” says Daniel Hong, general manager of AvroKO’s San Francisco office. “Working on our second Cherry Creek hotel allowed us to push the envelope for more creative materials and colors, as well as adding an eclectic mix of locally sourced vintage and contemporary FF&E.” Take the central chandelier in the lobby reminiscent of perfectly formed crystal icicles or the candlesticks found in the fireplace of a sitting area, which draw on the curated mix of collected finds.

AvroKO defined three design pillars as the foundations for the materiality, shapes and colors of the spaces: Denver modernism leads to wood details characterizing local residences; Colorado Strata refers to the sediment and stone layers of the mountainous terrain; and the gold rush injects the sparkle of jewel tones and minerals. The result is a design that features angular light wood joinery alongside heavily textured finishes, polished marble and leather upholstery to create a warm and inviting atmosphere enlivened by colorful local art.

“The challenge of creating an inclusive membership club is extremely difficult,” says Hong. “Art and design are great first steps in engaging the community and encouraging honest dialogue about diversity and inclusion.”

These stocks gain on the last trading session of the month!