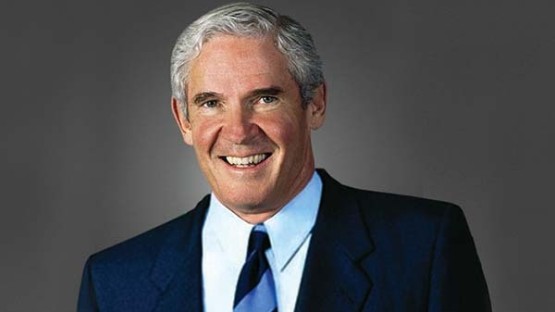 A historic $15 million gift from Joanne Knight in honor of her late husband, Charles “Chuck” Field Knight ’57, BME ’58, MBA ’59, established the Charles Field Knight Dean of Cornell SC Johnson College of Business and provides the Dean with discretionary resources to initiate innovative and highly rewarding research projects for faculty and students across the college.

SC Johnson College Dean Andrew Karolyi became the first Charles Field Knight Dean of Cornell SC Johnson College of Business on January 28 when the Cornell Board of Trustees approved the new title. “It’s an incredible honor to be the first Dean Charles Field Knight,” said Karolyi. “Our college’s Dean’s nomination for one of Cornell’s most outstanding alumni forever elevates the stature of the college while paying lasting tribute to Chuck Knight, an iconic business leader widely recognized for his business acumen. and his desire to be the best. I am extremely grateful to the Knight family. Their donation confirms what we have done and helps us to move towards our North Star.

SC Johnson College was launched in 2016, joining forces with Cornell’s top business schools – the Samuel Curtis Johnson Graduate School of Management (Johnson), Charles H. Dyson School of Applied Economics and Management (Dyson) and Cornell Peter and the Stephanie Nolan (Nolan) School of Hospitality Administration – and the creation of one of the largest and most comprehensive colleges of business in the nation. It brought together faculty from all schools who share strong pockets of common interest and created cross-disciplinary themes that foster collaboration and innovation.

Lester Knight believes contributing to the success of the college by helping fund it with a denominational gift in honor of his father is a fitting tribute to his father. “He was a widely recognized global business leader – one of the best business leaders of his generation,” he said. “He was tough, he worked hard and he was always determined to be the best. We hope that drive to be the best will be what he means to Cornell.

Supporting the college in this way also strikes a chord with Joanne Knight. “If my husband were here today,” she said, “he would be very proud to have this deanery named after him, because Cornell is where his business career began.”

A transformational and people-centered leader

Chuck Knight was the youngest to be named CEO of a multibillion-dollar company when he took over as head of Emerson Electric in 1973, aged 37. During his 27 years as CEO, he transformed Emerson from a national manufacturer of motorized engines. electrical products to a global technology giant. Through its acquisitions, the St. Louis-based company has grown from annual sales of less than $1 billion to nearly $15 billion. In 2021, Emerson was ranked 181 on the Fortune 500 and had 83,500 employees worldwide.

“Chuck Knight was incredibly competitive, focused and demanding,” said classmate Bob Staley ’57, BME ’58, MBA ’59, who was a senior executive at Emerson Electric for many years and is also a director emeritus of Cornell. and presidential adviser. “At the same time, he was fair and just superb in his personal interactions. He had incredible leadership skills, and part of that was his enthusiasm for business, which he believed to be the best game in town.

“Chuck wrote about the importance of creating an environment in which people can move towards and achieve excellence in his book, Uncompromising performance,said Karolyi. “He knew that people had to implement disciplined planning and control systems to ensure that opportunities were identified and seized. Chuck’s philosophy that people make the difference is central to his success as a management leader.

“This philosophy aligns perfectly with our college’s commitment to developing people-centered leaders,” Karolyi continued. “I view this gift as an affirmation of our purpose for SC Johnson College: to become the world’s preeminent college for developing responsible, principled leaders equipped to effect change essential to achieving sustainable, shared prosperity. .

The Knight Family Legacy of Giving to Cornell and Beyond

The Knight family has been extraordinarily generous to Cornell over four generations, beginning with Chuck’s father, Lester B. Knight Jr., Class of 1929, who made significant investments in engineering, business, and science. Chuck continued this legacy; his philanthropic support at Cornell also includes the Charles F. Knight ’57 Nanoscience Laboratories on the second and third floors of Duffield Hall. With two more generations of Knights graduating from Cornell, the family’s nearly century-long ties to the university are among the strongest and deepest of any multigenerational Cornell family.

Learn more about Chuck Knight and his family’s legacy on the Cornell SC Johnson College of Business news site.