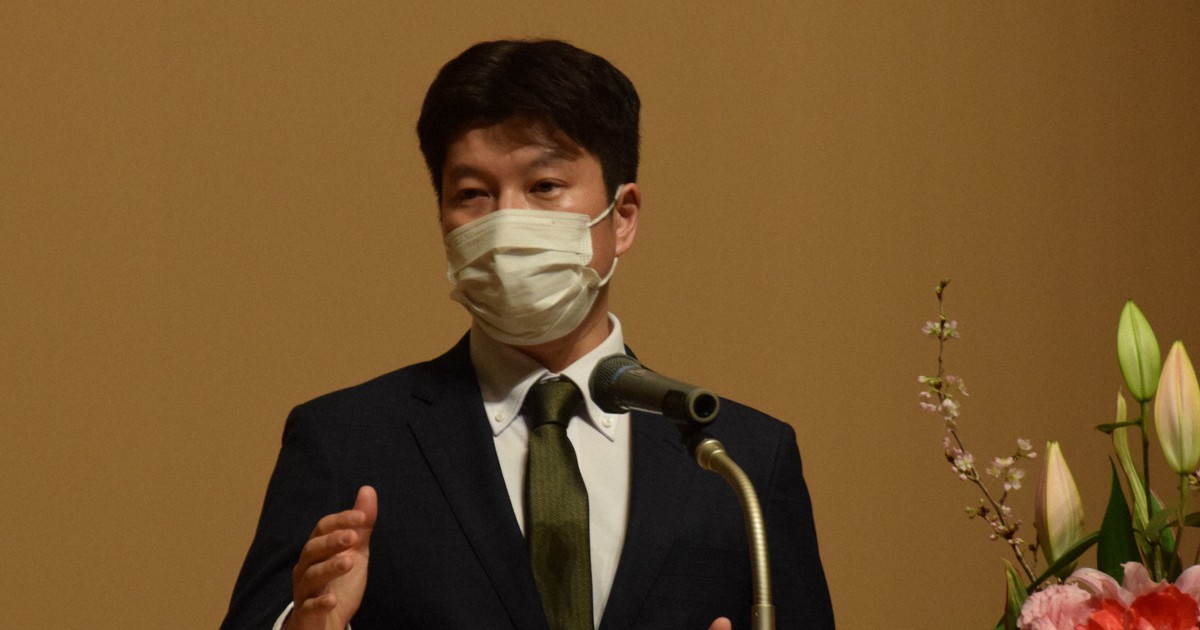 Arrested 15 times in the past, an ex-offender helps rehabilitate young people in Japan

TOKYO — A man who was arrested 15 times, sent to a juvenile detention center twice and was once an associate member of a crime syndicate is now making efforts to support released youths. In March, he launched a national organization to temporarily house these people and invited the attorney general to a symposium. The Mainichi Shimbun examined the reasons for the man’s determination.

“Today is the day we left. We promise to work to prevent repeat misconduct and recurrence,” Asato Takasaka said at a symposium in Tokyo on March 21 on behalf of organizers. Takasaka supports liberated youth.

The symposium commemorated the launch of a national group of companies that operate temporary residences where former juvenile offenders prepare to live on their own.

Takasaka, 38, grew up in Hiroshima. He started committing delinquency when he was a high school student and joined a motorcycle gang at age 14. He got into a fight, drove without a license ignoring traffic lights, stole at least one motorcycle and broke into a safe. The crimes led to him being sent to a juvenile detention center when he was 16 and then again when he was 18.

Even after undergoing correctional training, Takasaka never thought about severing ties with the other gang members. “I didn’t even think once about leading a decent life,” he recalls.

In Hiroshima at the time, there was always a crime syndicate member close to those who became members of a motorcycle gang. “They drove pretty women in nice cars, and were kind and cool, and I aspired to become like them,” Takasaka said. As an adult, he entered the underworld as an associate member of a crime syndicate.

At 24, his wife became pregnant. Takasaka recalls thinking, “At this rate, our child will be doomed to an unhappy future before birth. I need to rehabilitate.” The pair drove to Nagoya, a place Takasaka had no connection to, as he didn’t trust himself to be able to cut his ties with his gang mates or turn down offers that might lead him to break the law s stayed in Hiroshima. .

Life in Nagoya didn’t go smoothly for him right away. Takasaka involved himself in work bordering on fraud and held several jobs while hiding his past. He eventually went bankrupt due to repeated reckless spending. He got a job at a special retirement home for the elderly, believing that elderly care would be a profitable industry due to the increasing number of elderly people in Japan. It turned out that this became a turning point for him.

Takasaka talked to many old people and learned about their lives. When he accompanied them to polling stations for elections or accompanied them to temples, he was repeatedly thanked. The accumulation of such experiences helped him gradually put aside his “gangster pride”, and made him want to spend his time making others happy.

Takasaka then came across information online about the volunteer work of “Big Brothers Big Sisters (BBS)” helping juvenile delinquents, and joined. As a BBS volunteer, he had meals with young people who had resorted to crime or misconduct, listening to their concerns.

It was around this time that Takasaka’s second child was born. Her mother came from Kyushu to see her grandchildren. Taking her for a ride around Nagoya, he asked her what she thought of him while he was growing up. “Kill you and then kill me – that’s what I thought about every day,” she replied. When Takasaka heard those words from his mother, tears welled up in his eyes. He realized how ungrateful he had been to his own mother and the irreversible damage his past behavior had caused.

In 2014, the man established the Re-Misconduct Prevention Support Center Aichi in Nagoya. The following year, he began operating an “independence preparation house”, a private facility where people who had nowhere to go after being released from juvenile detention centers, or who were considered as difficult to reintegrate into their current homes even if they avoided prosecution, could live temporarily.

Home staff help users to rehabilitate by teaching them how to cook, wash their clothes, manage their money and advising them on how to find work. Takasaka said: “Providing integrated housing support is essential to enable (young people) to reflect on their relationships with others and to prevent their stays in detention centers from becoming too long for lack of a place to return to.”

According to Department of Justice data, the rate of those reincarcerated for recidivism within two years of release is approximately 1.8 times higher for those with no place to return, compared to those who are released on parole with proper housing. Recognizing that securing housing was an important factor in rehabilitation, in 2011 the Ministry of Justice set up a system of “homes preparing for autonomy”.

As of April 2021, Independence Preparation Homes registered in Probation Offices are run by 447 companies across the country, which receive commissions from the central government. Some 1,700 people use the houses each year and the number of users is growing. As the facilities are run by a variety of businesses including welfare societies, non-profit organizations and hoteliers, the rooms come in different forms, such as apartments or quarters that are part of the property. welfare.

Takasaka explained, “I wasn’t in a position where I could share know-how and information on how to help with rehabilitation.” From his own experience, the man knew the importance of cooperation between supporters across communities. He also wanted to offer better support. In 2019, he thus undertook to create a national organization with the help of associations in Osaka and Hiroshima, with which he was in contact.

The first thing Takasaka did was to understand the real situation. He and others contacted the Ministry of Justice and, with the cooperation of probation offices across Japan, conducted a survey of companies operating independence preparation houses. The research highlighted common issues, including a lack of human resources and funds, and a lack of information about users, such as their medical and developmental history. Takasaka then realized the importance of creating a network of companies that could share information and work together to solve problems.

He then proceeded to establish the Japan Independence Preparation Home Council and began to prepare a symposium. He asked Attorney General Makoto Hayashi to deliver a keynote speech at the symposium.

Hayashi focused not only on investigations and trials, but also on recovering the people who committed the crimes. Hayashi spearheaded a review of the Prisons Act in 2005 – the first major change to the law in about 100 years – and improved programs and treatment for prisoners to help them reintegrate into the society. When he was head of the Nagoya Attorney General’s Office, Hayashi visited the nonprofit facilities in Takasaka. Takasaka used this connection to ask her to take the stage during the symposium.

In his opening speech, Hayashi touched on the history of cooperation between criminal justice and community welfare. He offered his encouragement to the local independence readiness council saying, “I am convinced that sharing even failures and encouraging each other, as well as sharing experiences and knowledge will increase the level of activity.

Takasaka became the representative director of the newly created council. When a reporter from Mainichi Shimbun asked him if his activities served as atonement for crimes he had committed in the past, he flatly denied it.

“The damage I’ve done is irreversible unless I can turn back time. I don’t think my current activities will serve as an atonement. The fact that I’m a former criminal remains the same,” Takasaka said. , adding that he believes “although the past cannot be changed, I can change myself and the future”.